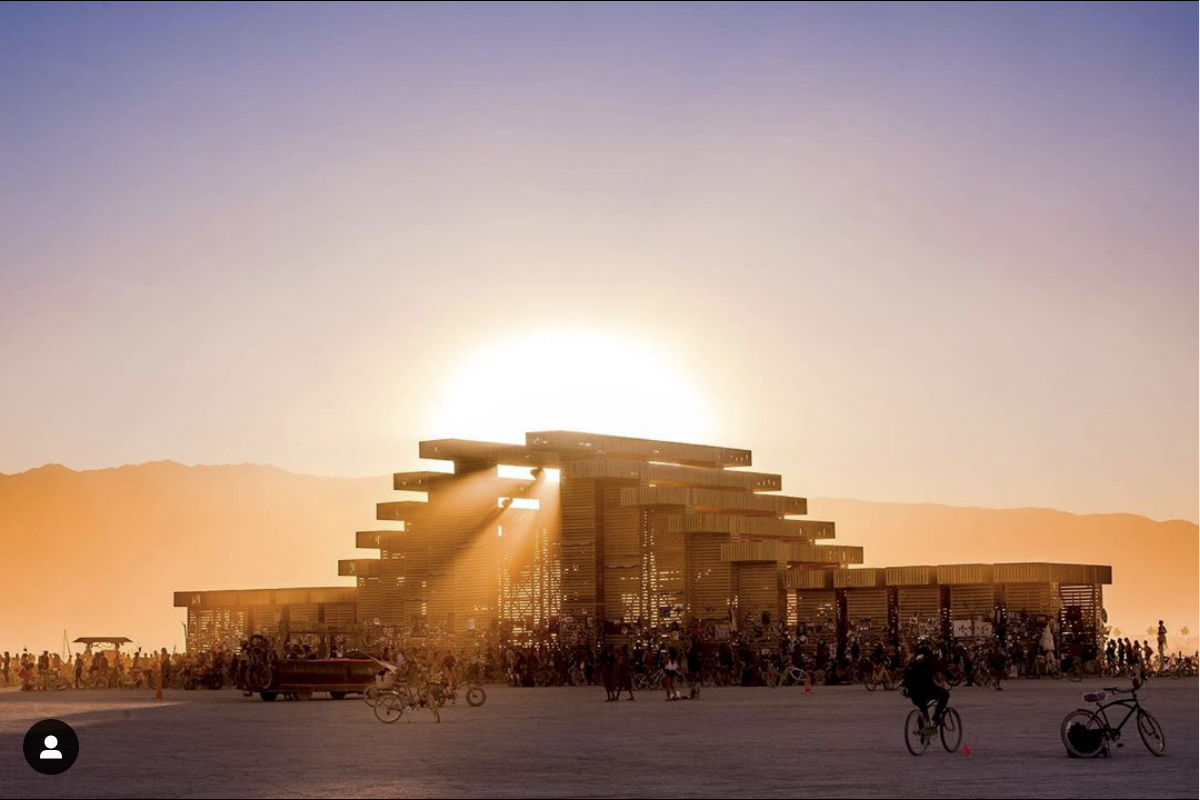 Every year since 1986 a great event is held in the Nevada desert (USA) - Burning Man festival. This is a tremendous open-air exhibition of big-scale art objects. A remarkable part of the event is the last day when some of the installations are burned down. What makes it extremely interesting for the event designers is that all the works are constructed using the same technologies and concept making as in event design industry. MFS teacher and FlowerBazar project manager Lyubov Tarasova made an overview of the best Burning Man installations in terms of these two criteria.

I used 3 sources during my research: Burning man website, Instagram accounts of the installations, and interviews with the artists. The last one turned out to be very emotional, there were a lot of great stories that help you to look at the works from a completely different angle.

The theme of 2019 was “Metamorphosis”, which means that all participants tried to reflect this idea in their works.

1. The Temple of Direction

This architectural work was designed as a temple where people could leave anything and find what they really need instead. For most of the guests, this was a story about emotions and spiritual experience. As time passed, the installation turned into a kind of altar - people came there to leave notes and photos, to grief about the dead, or simply to meditate. The temple brought a piece and feeling of home in the middle of the desert.


The Temple of Direction by Geordie Van Der Bosch

The building itself was a linear space, capturing the elegance of the torii gates in Japan. The linear structure reflected the idea of life when there are birth, stages of life, and finally death.

The installation was eco-friendly: the walls were built of wooden bars, and the lamps were made of leaves. At the end of the event, it was burned, so the only thing left was light ash.

The team that worked on the installation made a very thorough preparation before the construction. They built storage for the wooden elements and hired transport equipment.

The participants prepare technical documents, calculations, plans, and renderings for each of the objects. They need to give all that to the Burning Man organizers because they are very worried about safety. It is important for them that everything would go right and the company could build for sure what they have in mind.

Several dozens of life-size human wax figures. From a distance, they all seemed the same, but if you step closer you will see that every one of them has its own face. To make these differences, the artists scanned the faces of real people and created 3D models.

This is a very impressive installation in terms of the concept. The artists thought through the process of burning at the end of the festival: wax figures slowly melted, revealing to the world the black frames with bright red hearts. They were a symbol of the fact that when everything else disappears, humanity remains.

This is a suspended staircase of 27 stones, which everyone could walk through. The author of the installation made a magical work: the heavy stones seem weightless. To do the trick, he hung them on thin metal cables.

The engineering part of the installation was extremely difficult. It took 173 pages of calculations to complete the project! Compared to this, creating a mood board is not that big of a deal.

During the year before the festival, the artist performed two tests. First of them was called Stone 1: he hung up a stone between the trees to check the bracing. As a result, he found out that the bolts on a glue were the most reliable option. The second test - Stone 7 - was needed to understand how the cables will react to walking on stones.

Since the artist had come to the Burning Man before, he arrived as prepared as possible. The entire structure was finished in six days.

A beautiful pavilion, created to evoke a sense of expansion, because only in this state can one be healed and create. Outside it looks small, but inside it gives the impression of a large space. The effect is achieved partly due to the different walls’ color - blue on the outside and red inside. And partly due to the roof which gives an open-work shadow.

The roof was made of bottles and cans which looked like beads from a distance. The structure itself had joints and was made like a tent, so the construction of the pavilion did not take much time at the festival. The preliminary preparation of the roof took 24 days though.

I admire how beautiful it looks from afar, although in fact everything is made from garbage.

An illuminated cocoon egg that rotated around and opened up, revealing two figures with growing wings. The installation symbolizes the cocoon where a person stays during life. If the person dares to reveal himself to the world, the incredible magic starts to come.

This installation is very interesting in many ways. One of them is logistics because it was transported from Ukraine. Another one is construction: there is a huge number of mechanisms inside.

Cocoonap was made in Ukraine since it costed only 3000 USD there. In the USA you could only cut metal rods into a frame for this sum of money. After that, the disassembled installation was transported by plane.

As for the mechanisms, such dynamic objects are not very typical for Burning Man, since fine sand dust is clogged in all cracks and as a result, the motors fail. The team had to constantly clean the equipment, especially since the construction moved much more often than they expected: the festival guests asked to turn it on all the time.

Imagine a furnished open air room for relaxation at a 4 meters height. There are sofas, armchairs, a table with a lamp - everything is like in an ordinary living room. Perhaps, this was the most soulful installation. It played on the feelings through the idea of ​​home.

The authors came up with an absolutely brilliant move: they put a doghouse on the ground under the room, with a solar battery on the roof. The generated electricity went to the lights above. In the evening, when you don’t see the area around, there was a feeling that you were actually in a room with dark purple walls.

The installation is a metal construct with a plywood floor. All the objects above were screwed together so that nothing would fly away with the wind. Everything was assembled on the ground and then lifted up by a crane.

The most stylish and modern installation. It is a combination of mirrors and metal elements of geometric forms which are about 10 meters high.

These are a few triangles. They have mirrors on one side that sparkle during the day and LED-backlit screens that worked at night on the other side. The most beautiful view was at sunset when red and yellow reflections combined with the blue electric light.

The authors solved a difficult technical problem: they made the triangles stable enough, and at the same time folding for better transportation. They also covered mirrors with a special coating to repel dust, since it was unreal to wipe the sand from the installation during the festival.

Fragments were accompanied by a beautiful legend about a goddess who gave a mirror to a person where he could see the future. But the man got scared and broke it. Mirror fragments fell in the desert, and everyone could see them on Burning Man.

This is a huge butterfly (4 meters wide and high) with Petrykivka painting on the wings. For the artists, it is a symbol that everyone can spiritually purify and reborn, like a caterpillar being reborn into a butterfly.

Like Cocoonap, Catharsis was made by Ukrainian team, but the authors worked on it in Seattle with the help of a Ukrainian volunteer organization. It took a lot of calculations to create the butterfly with the slightly curved back wings. The metal frame of wings was bent with bare hands to form the proper shape. Inside the wings was the particleboard. The use of these materials is closely described at the Event Design courses of Moscow Flower School.

Particleboard was then puttied and painted manually in the Petrykivka style. After that the authors applied a layer of epoxy and repeated that cycle several times. They needed to make many layers of paint and epoxy so that the object would not be damaged from dust and sand.

The butterfly was illuminated during the evenings, and it seemed that the painting itself sparkled. To do that, they used two ultraviolet spotlights that stood in front of the butterfly. Moreover, different colors had different light intensities, which created a luxurious 3D effect.

The Folly was a piece of a shanty European village with a tower and a mill. The artists had an idea to make it similar to Hogwarts - full of unexpected stairs and tricky passages.

There was a courtyard with a stage that hosted performances all week. All interior spaces were filled with various items. The team collected this stuff all over the world: there was a list of things that you could present on the official website of the installation. It included, among other things, typewriters, ropes, rusty vintage instruments, animal bones and skulls. When it burned it was such a loss, but it looked very beautiful.


The Folly by Dave Keane & The Folly Buildersipsum

The name is translated from Spanish as “little butterfly”. The installation represents a girl emerging from a cocoon - a symbol of rebirth.

Mari Posita was made of more than 2,000 very thin wood slices. The lower layers were heavy and gave stability to the installation. The authors left the hole inside the girl’s figure where the creator could move and adjust the details. Slices were glued together in blocks to make it easier to transport.

Everyone wanted to take a photo of this installation. It fit perfectly into the landscape and always looked different from various angles and with different light.

She is divinely beautiful and wakes up a lot of emotions.

Creating such installations seems like a fantastic challenge, but lots of things are created easier if you know how to make a cool event design team.

We believe that one day Moscow Flower School will be a part of Burning Man too. Why not?